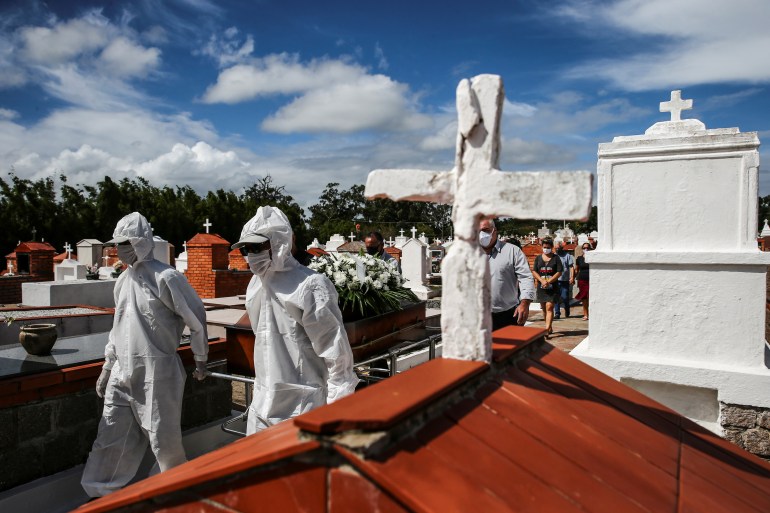 With the surge in a more deadly and contagious Covid variant, Brazil has recorded more than 4,000 Covid-related deaths in 24 hours for the first time.

Hospitals are teeming; people are dying as they wait for treatment in some cities, the health system is on the verge of collapse in other areas. The increased number of fatalities in the country has taken the death toll to almost 337,000, second only to the US.

However, the country still sees a contradictory scenario where President Jair Bolsonaro still does not wish to impose and opposes any lockdown measures to curb the outbreak.

He reasons that the damage to the economy would be more detrimental than the virus’s effects. He has also tried to reverse some of the restrictions imposed by local authorities in the courts.

Addressing supporters outside the presidential residence on Tuesday, he condemned quarantine measures and recommended without evidence that they were linked to obesity and depression. He did not talk anything about the 4,195 deaths recorded in the previous 24 hours.

As of today, Brazil has had more than 13 million cases of coronavirus, as per the health ministry. In March, approx 66,570 people died with Covid-19, more than double the preceding monthly record.

“Brazil now… is a threat to the entire effort of the international community to control the pandemic,” Dr Miguel Nicolelis, who is very vigilant in tracking cases in the country, closely shared with the BBC.

“If Brazil is not under control, then the planet is not going to be safe, because we are brewing new variants every week… and they are going to cross borders,” he mentioned.

In most states, hospitals’ situation is that patients with Covid-19 are using more than 90% of intensive care unit beds. Several states have informed short stores of oxygen and sedatives. However, still, some cities and states are easing measures related to the movement of people.

“The fact is the anti-lockdown narrative of President Jair Bolsonaro has won,” Miguel Lago, executive director of Brazil’s Institute for Health Policy Studies, which advises public health officials, shared with the Associated Press.

“Mayors and governors are politically prohibited from beefing up social distancing policies because they know supporters of the president, including business leaders, will sabotage them,” he added.

President Jair Bolsonaro, shifting his focus on vaccinations, pledged to make 2021 the year of vaccinations. However, the country has fought with the rollout of its programme.

Critics assert that his government was slow in negotiating supplies. Epidemiologist Ethel Maciel commented that Brazil was in a “dreadful situation”, stating to AFP news agency: “At the rate we’re vaccinating… the only way to slow the extremely fast spread of the virus is an effective lockdown for at least 20 days.”